Taylor Mackenzie had a frustrating two part endurance race on Saturday when the quickshifter on his bike failed early in the first part. The extra physical effort needed to ride a superstock race bike without a quickshifter or autoblipper resulted in him suffering “Arm Pump”, the effect of which is reduced strength and feeling in the hands. He finished 5th. The fault was rectified for the second part of the race during the 10 minute “pit stop”. However, the effect of “Arm pump” takes much longer to wear off, so Mackenzie continued to suffer for the second 22 lap race. He finished 7th.

Sundays race saw Mackenzie experiment with a new set up to his front forks, which proved to be very positive. In the wet conditions, he was part of the group of leading riders until towards the end of the race when passing some backmarkers cost him valuable time. He finished 4th.

Michael Rutter got his 2019 TT underway with a single lap on Sunday on his KMR prepared Kawasaki Supertwin before it overheated.

Junior Supersport rider Harris Beech came through a difficult qualifying session where he experienced difficulties with a new clutch, that saw him start his race in 33rd position. He raced through to finish in 16th position, just 1/10th of a second away from a points scoring position.

Mackenzie (Race – P5, P7, P4. Championship – P3 ): “My results have been quite frustrating this weekend, but there are a lot of positives that I can take away from Donington. I’m absolutely over the moon with the set up of my bike. Also, I know that if I hadn’t suffered arm pump in Saturdays races, I would have been much more competitive, and on Sunday, I just got unlucky with backmarkers. It’s a long championship, and the team are working really well, so I’m looking forward to getting to Brands Hatch and racing again”.

Rutter (Supertwin – 19min 55.66 sec): “It was great to get my 2019 TT underway, but a shame that I only managed one lap. It was quite windy on the course, but most of all, it just feels great to be back here and building up to race week.” 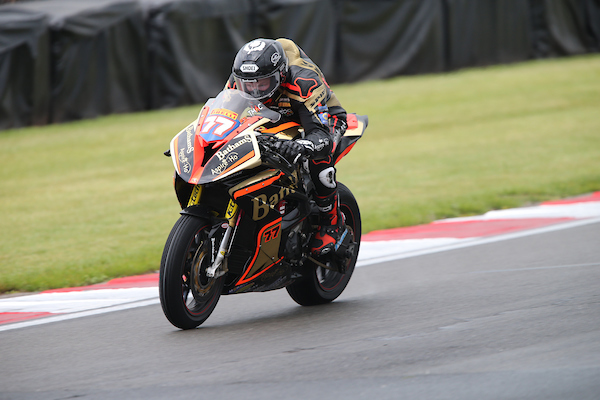