Taylor Mackenzie entered the second half of the season with another convincing ride to second place in todays first race at a sun kissed Knockhill race circuit. By keeping his run of consistency going that Mackenzie started in the first half of the season, he is emerging as the only person able to consistently challenge the otherwise dominant combination of championship leader Richard Cooper, and the official Suzuki team.Today, after qualifying in second position for the two races, and a race long battle that saw both riders race under the lap record, Mackenzie missed out on victory over Cooper by less than a second. The result extends his lead over third position in the championship, and keeps him still in touch with the championship leader with plenty of racing left. Mackenzie (P2 – Championship P2 ): “Obviously I’m disappointed to finish second to Coops again, but I must admit, he is riding brilliantly right now, and bringing the best out of me. I gave it everything today, even going under the lap record for the last two laps of the race, but so did he!My bike was mega today, I’ve got no complaints about it at all. As usual, Alec, Graham and Fred gave me the best BMW on the grid, and I love racing it. I’m really looking forward to having another go tomorrow ”.Michael Rutter: “I’ve really got to pay tribute to Richard Copper, Hawk Racing and Suzuki. They’re a really really strong package right now, and I’ve also got to say that I believe Alec, Graham, Fred and Taylor are rinsing every single last ounce of performance from the now obsolete BMW S1000RR.
As a racer, it’s true that it is hard to get beaten, but we know that we are getting the very best we can from the bike, and I believe we’ve reached a point with it that we may need to change it, or something else drastic to do with it to get any faster. We are comfortably the highest placed BMW in each race, and in the championship, and we are only missing out to Suzuki by tiny margins in the races, so I believe everything is still to play for. There’s a long way still to go.” 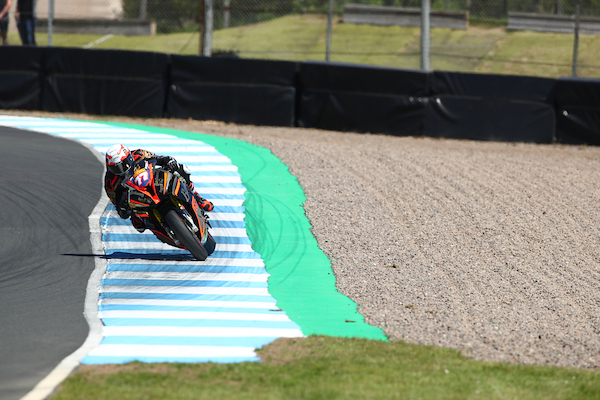