Taylor Mackenzie won his second race of the 2019 Pirelli National Superstock 1000cc Championship in treacherous conditions today.In a race that saw no fewer than 11 riders fail to finish, Mackenzie kept his cool in deteriorating conditions, and claimed his second victory in the last three races to keep the pressure on the championship leader. He took the lead on lap 5, and stayed there until the chequered flag. The result keeps Mackenzie and Bathams Racing just 38.5 points behind the championship lead, with 200 points still available. Mackenzie (P1 – Championship P2 ): “I’m over the moon with todays result. It’s nothing less than the team deserves after all the hard work put in by the guys in the garage, and the support from all the sponsors. The conditions were terrible today, but I really focused on keeping my cool, settling in to my own rhythm, and not allow myself to be distracted by the “+0” that was on my pit board for ages. Michael was doing my pit board today, so I did wonder after about 15 laps if he had actually changed anything on it, but I shouldn’t have worried, he was spot on, and a great stand in for the guy that usually does my pit board. Eventually the gap back to Richard (Cooper) started to go up, and I knew that I just had to keep doing what I was doing to win the race.Donington Park is the next round, and I’m really looking forward to it because we were strong the last time we raced there, I’ve won two out of the last three races, and there’s still loads of races left”Michael Rutter: “We used the wet settings that we had for Taylor at Brands Hatch when he last won in the wet. Todays race was one hell of a race to watch, and full marks to Richard Cooper and the official Suzuki team for pushing Taylor all the way, but Taylor just didn’t put a foot wrong all race. He rode the perfect race, and deserves his win today. I’m really pleased for all the team and sponsors who are all part of Bathams Racing this year, but I must also say a huge thanks to all the fans who stood out in the rain to watch the race, and I really hope they enjoyed it as much as the whole of Bathams Racing did.” 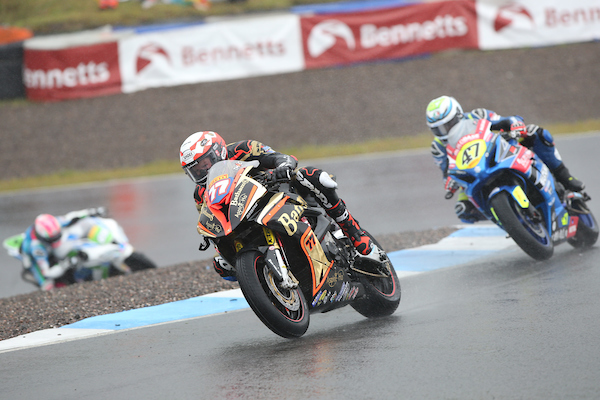